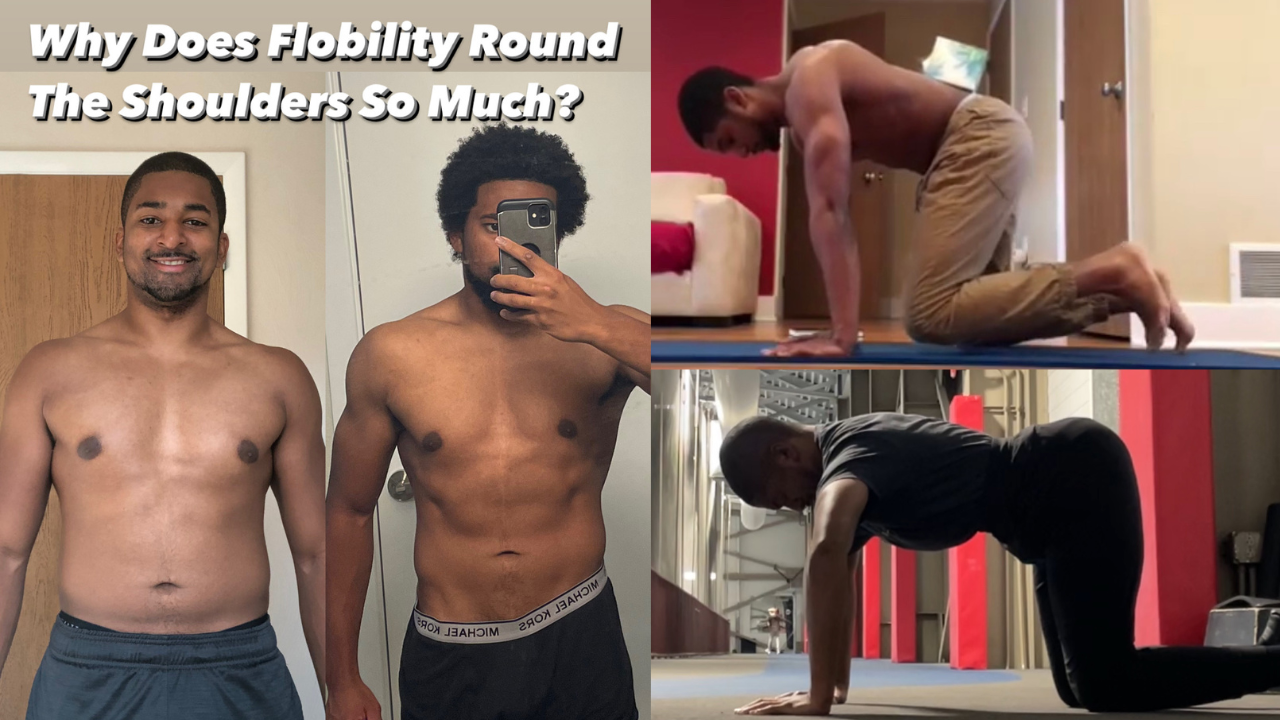 "Why Do You Do That With The Shoulders?"

Why are you doing that with your shoulders?

If I had a nickel every time I got a comment, DM and mention (meaning someone made a video talking about my shoulders), I’d have…

Ain’t retiring from this question, however it is asked quite often.

Another one I get quite often:

“My shoulders are already pretty rounded, would this make them worse?”

And I totally get it.

Y’all forget that I am no different than you in the sense that I thought ALL the same things you did when I first saw Flobility on my Instagram feed 3 years ago.

I questioned the pants.

I questioned the shoulders.

I questioned the lower back being off the floor.

I questioned the elbows in the deadlift.

I questioned the exhaling.

But I stopped asking questions after:

Jordan blew my mind on a podcast (I was fortunate enough to get an hour of his time back then).

My shoulder and hip mobility became the best they ever were in 2 months from signing up for Flobility (after grinding on them for over a year).

My pain was completely gone after 6 months.

And after a little more time, my shoulders were the complete OPPOSITE of rounded: 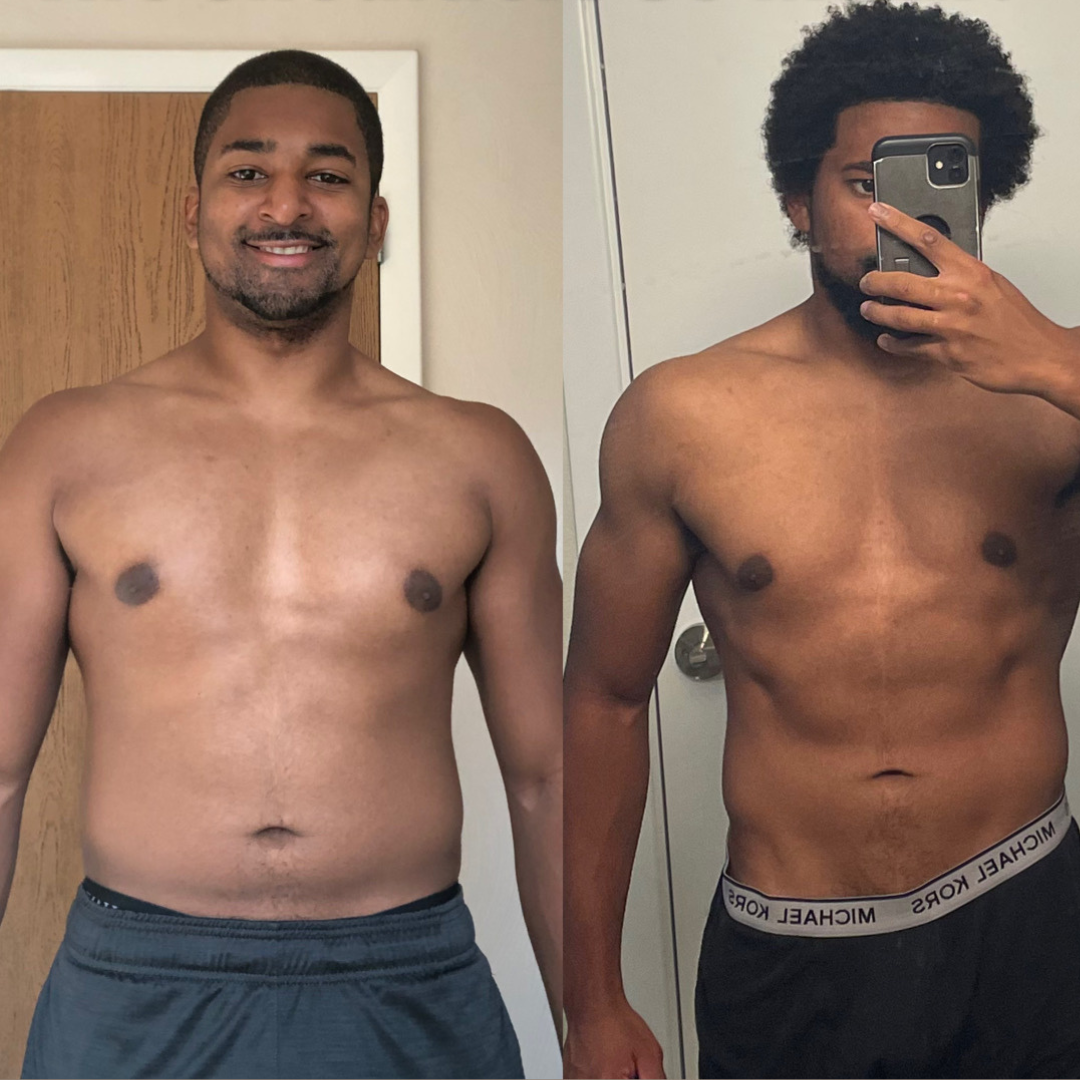 My shoulders actually opened a lot.

However, from the side you see this: 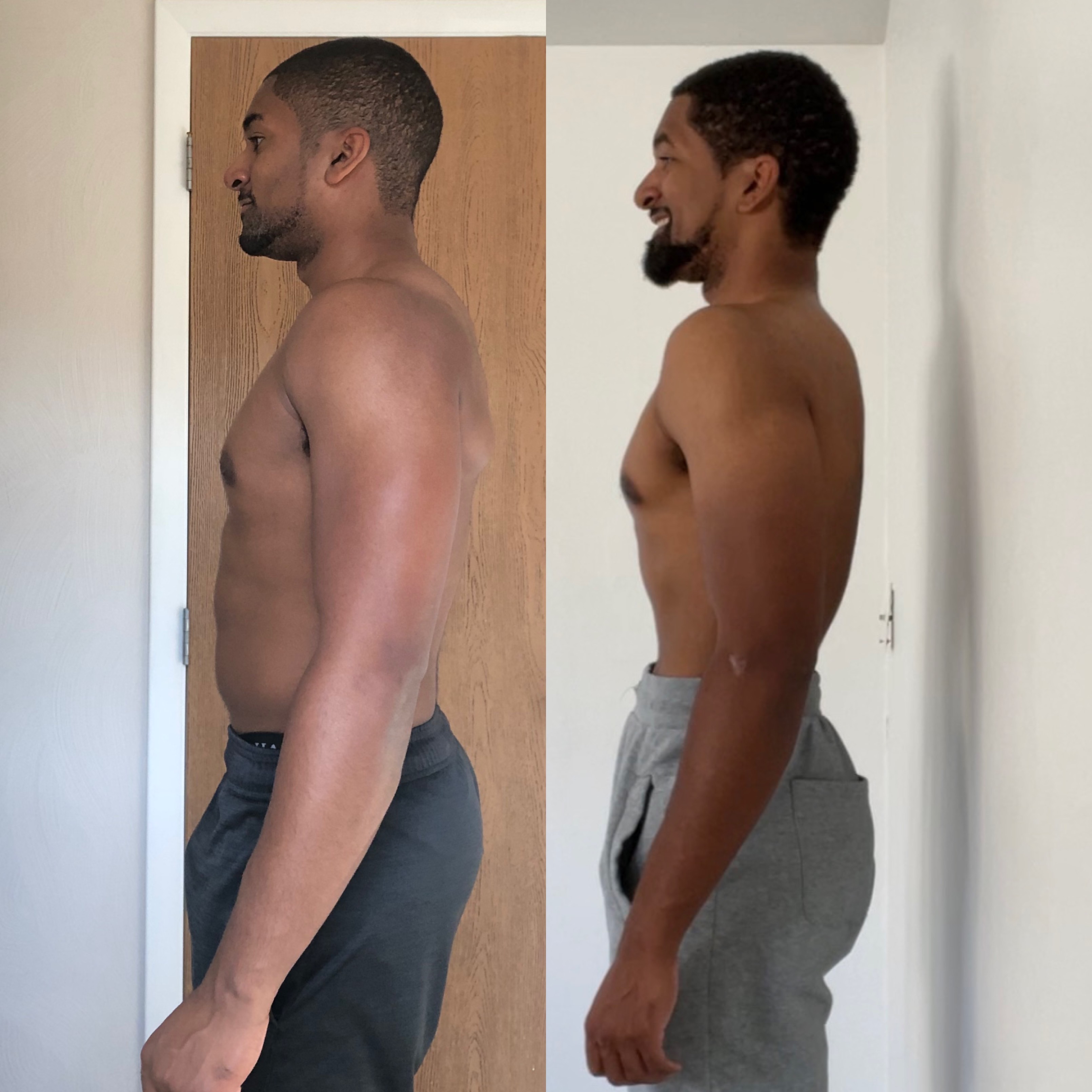 And your eyes go right to those shoulders haha.

Like I said, I get it, I thought the same thing.

What is a shoulder?

I feel like we should define this term of the shoulder explicitly so it’s clear what it actually is. That way we can have better context on optimal mobility of this joint.

So in science sometimes naming conventions have this really complicated process in which they smush words together and call it a combination of the letters.

Hence, glenohumeral joint as an aka for the shoulder. 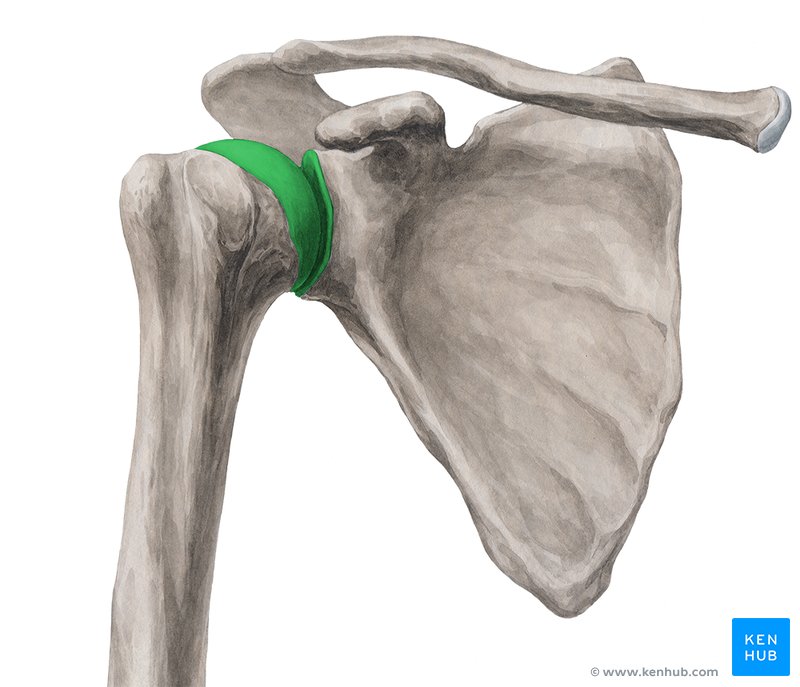 But this isolated image is a little too zoomed in and lacks the bigger picture of what the shoulder is really about: 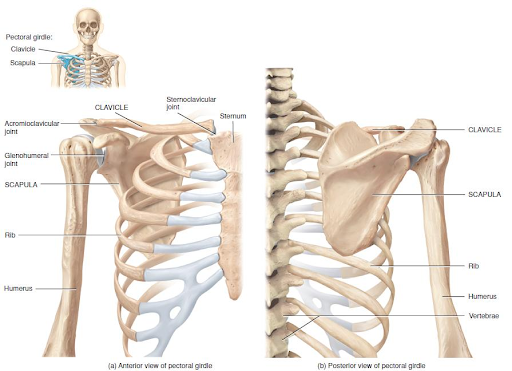 In every image of the spine that includes the ribs and shoulders, you’ll see the shoulder blades at a very specific position: 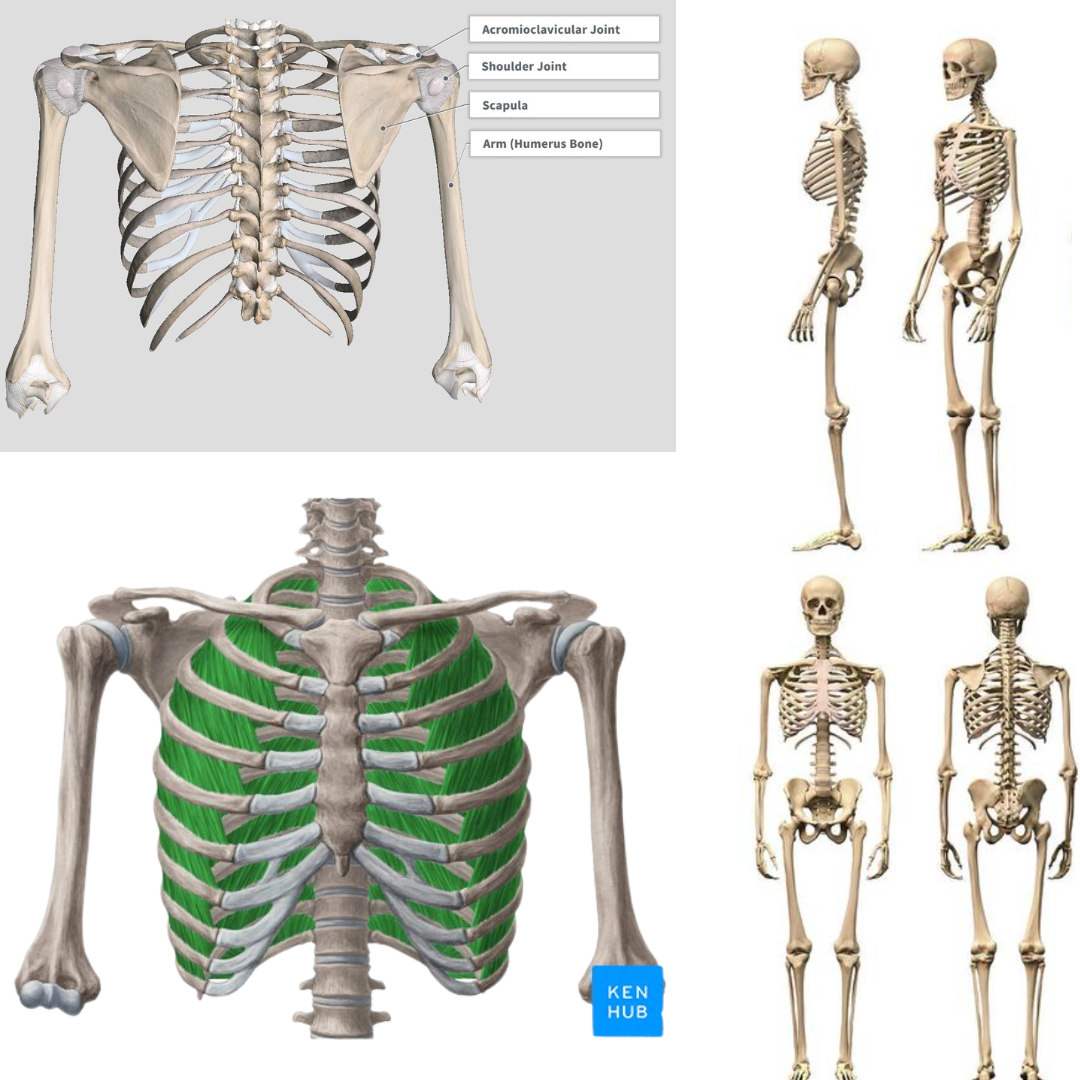 What do you notice about the shoulder blades in all those pictures?

Let me put the same photo with a hint: 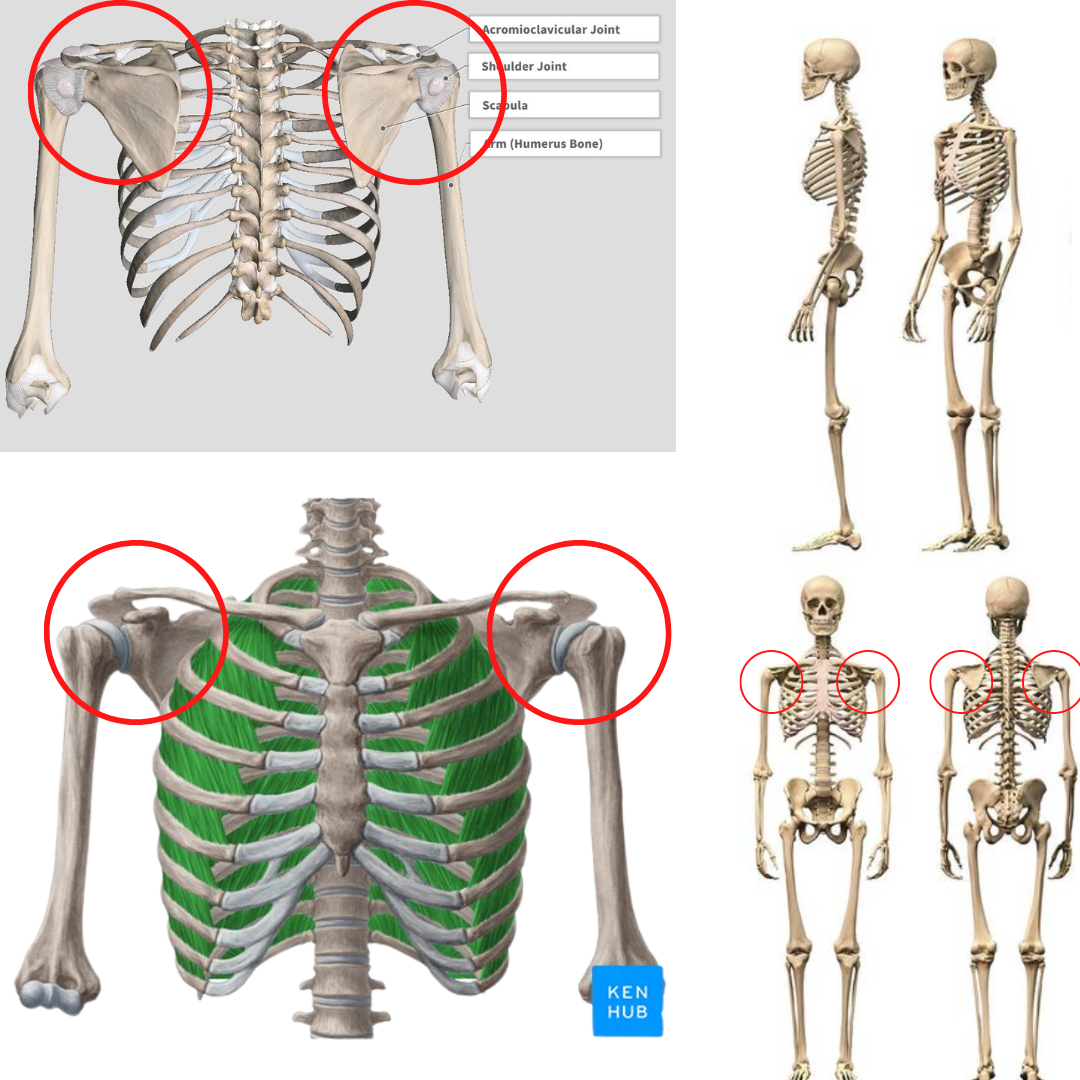 There’s space in between them. They are not “back and down”. You’ll NEVER see a skeleton model (in person or online) unless they are depicting some “posture” with the shoulders back and down. Now why is that…

Why wouldn’t we see what is commonly cued for “good posture” and weightlifting in all of the anatomical models with the body in a “neutral” position?

What could be the reason for this space in between the shoulder blades? While there’s many reasons besides what I’m about to show you, this reason is a pretty big one: 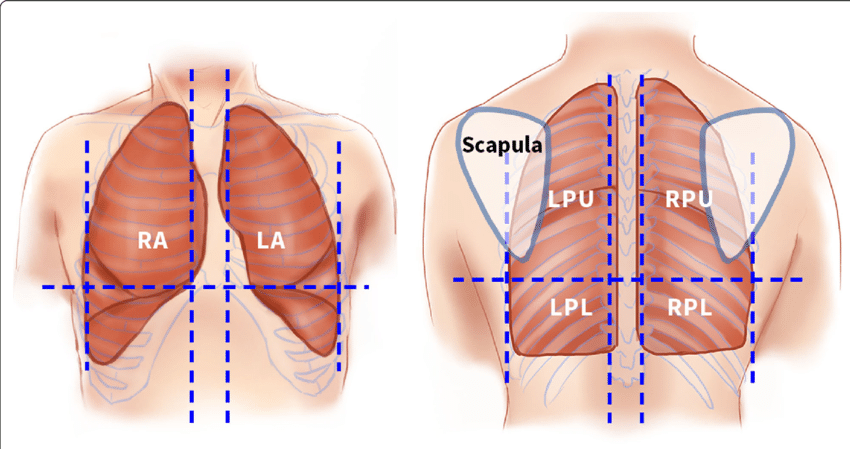 Yes, your lungs are actually in the upper part of your thorax (torso).

Every-time we inhale, the lungs increase in size (air is going into them) so the rib cage needs to expand in ALL directions to accompany the expansion of the lungs.

The more the ribs can move and the stronger the diaphragm is (oh man the diaphragm is worth a year’s worth of blogs), the more air we can intake which directly affects our cardiorespiratory system (heart and breathing system). 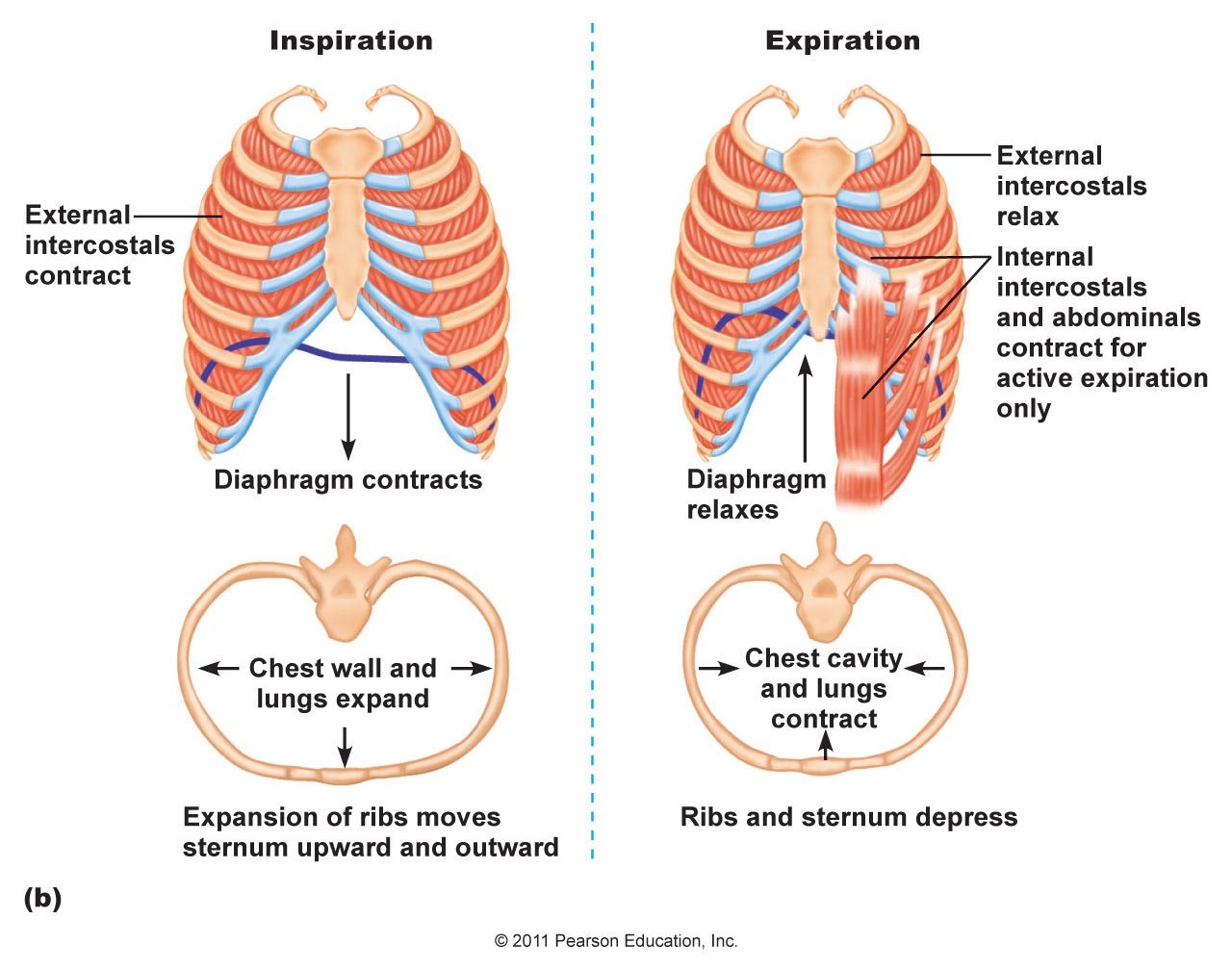 So now what would happen if we smashed those shoulder blades back and down… a lot?

So it seems to be forced to go to the front and that seems to be how we get shallow chest breathing (in-part).

And it’s not that chest breathing is “bad”.

It just can’t be the ONLY place the breath goes.

We want that 360 expansion. But how are we going to do that if there’s quite literally bone in the way (shoulders blades stuck in retraction or back and down)?

On top of that, this jamming of the shoulders back and down tightens the back of the body and forces the front open (rib flare, flaccid core etc). If the muscles in the upper back and in between the ribs because tight and immobile (literally can’t move) how would we breathe back there? The only way breath will go into the upper back and sides is if the musculature will ALLOW it to. If the muscles don't move when you breathe into them, COMBINED with the literal bones being smashed backwards and blocking it even further…

No breath is going back there. It’s literally like trying to breathe into your upper back laying on the ground…
You can’t..

Because there’s a ground in the way.

That is exactly what it feels like to breathe into really tight muscles (or into bone lol).

So the only way we can learn how to breathe back there is by doing the opposite of what we've been doing! And before we continue, I want to make it clear that scapular retraction is not "bad". We just need to be able to retract the scapular without crushing the ribs and forcing them to rotate (rib flare). They need to be able to glide about the rib cage.

Step in a movement I also could not do very well (and still have a lot to work on) scapular protraction.

For years all I did was pull my shoulder blades back and down before lifts. And yes, it did give me a type of stability, but at a cost. It was compressing the H E double hockey sticks (L L) out of my shoulders. Not only that but that stability system was creating iNSTABILITY in my scapula which is why they looked like this for some time: 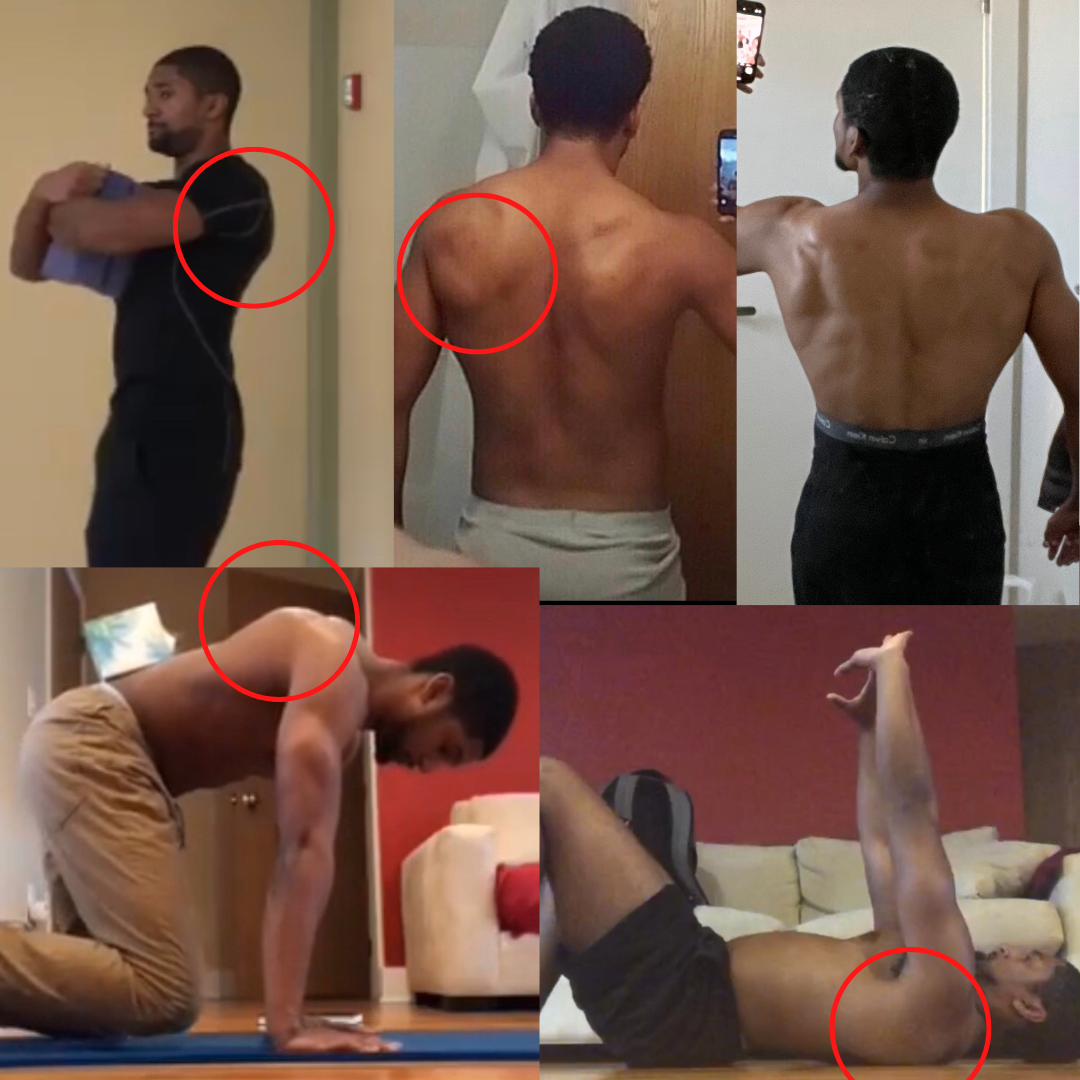 My scapula were stuck in retraction. I was really good at retraction (via shoulder blades back and down).

I was NOT very good going in the other direction, protraction. How does protraction apply in real life? Why do we want to be able to "reach"?

A great example of protraction/ the reach is in boxing: 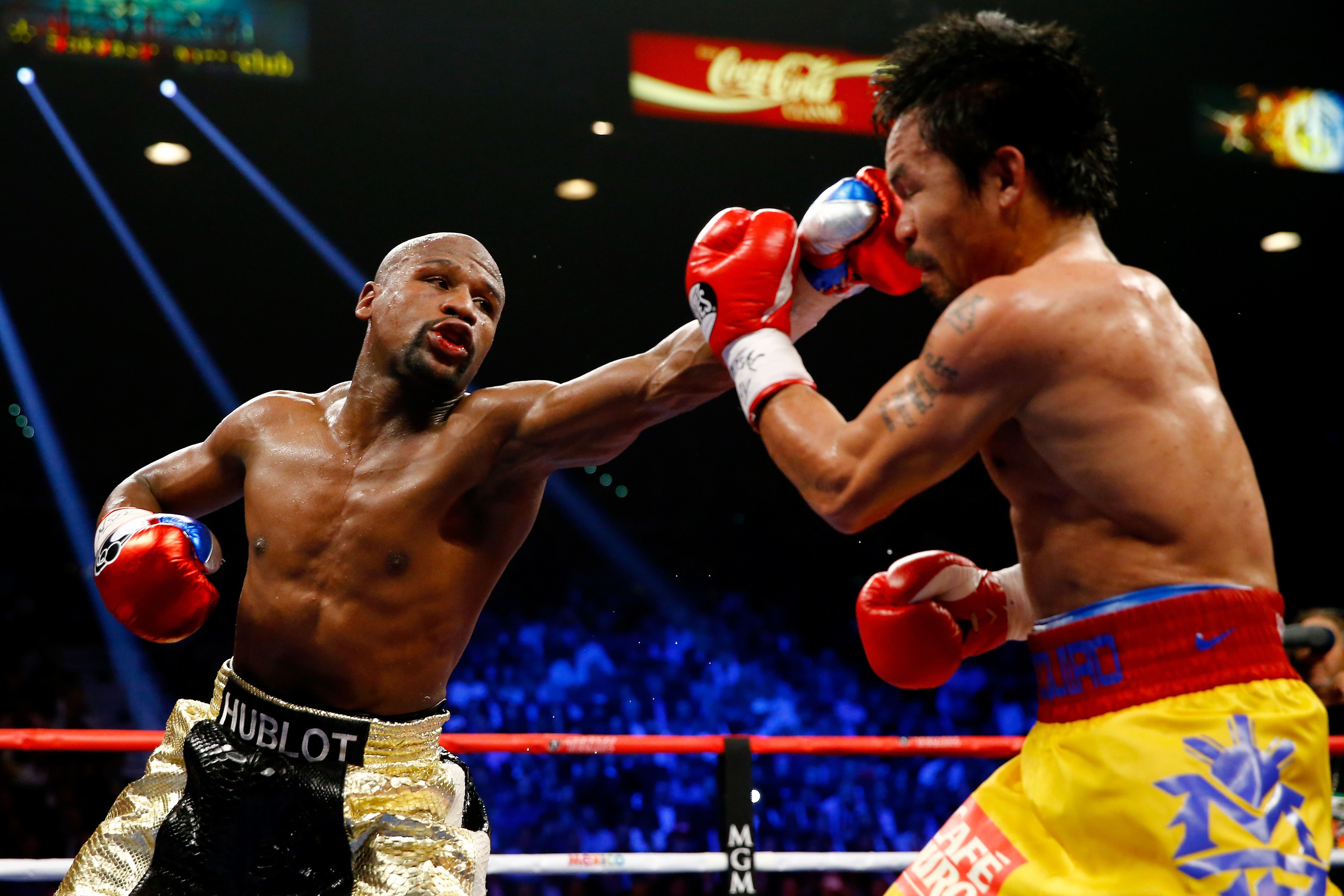 Look at that “reach”. That is protraction. Imagine telling Floyd to pull his shoulder blade back and down before he punched?

Floyd knows nothing about Flobility. So he isn't "practicing" reach, it's his life. His life is protraction as a pro boxer. So "reaching" is not an "exercise", it's a fundamental movement that a lot of us (myself included) are not very good at. By that same token, there is no Flobility hinge, squat or "posture". These aspects that we're practicing are exemplified in people (who all happen to be exceptional in some form or fashion).

Check this highlight Jordan made out: This Explains A lot 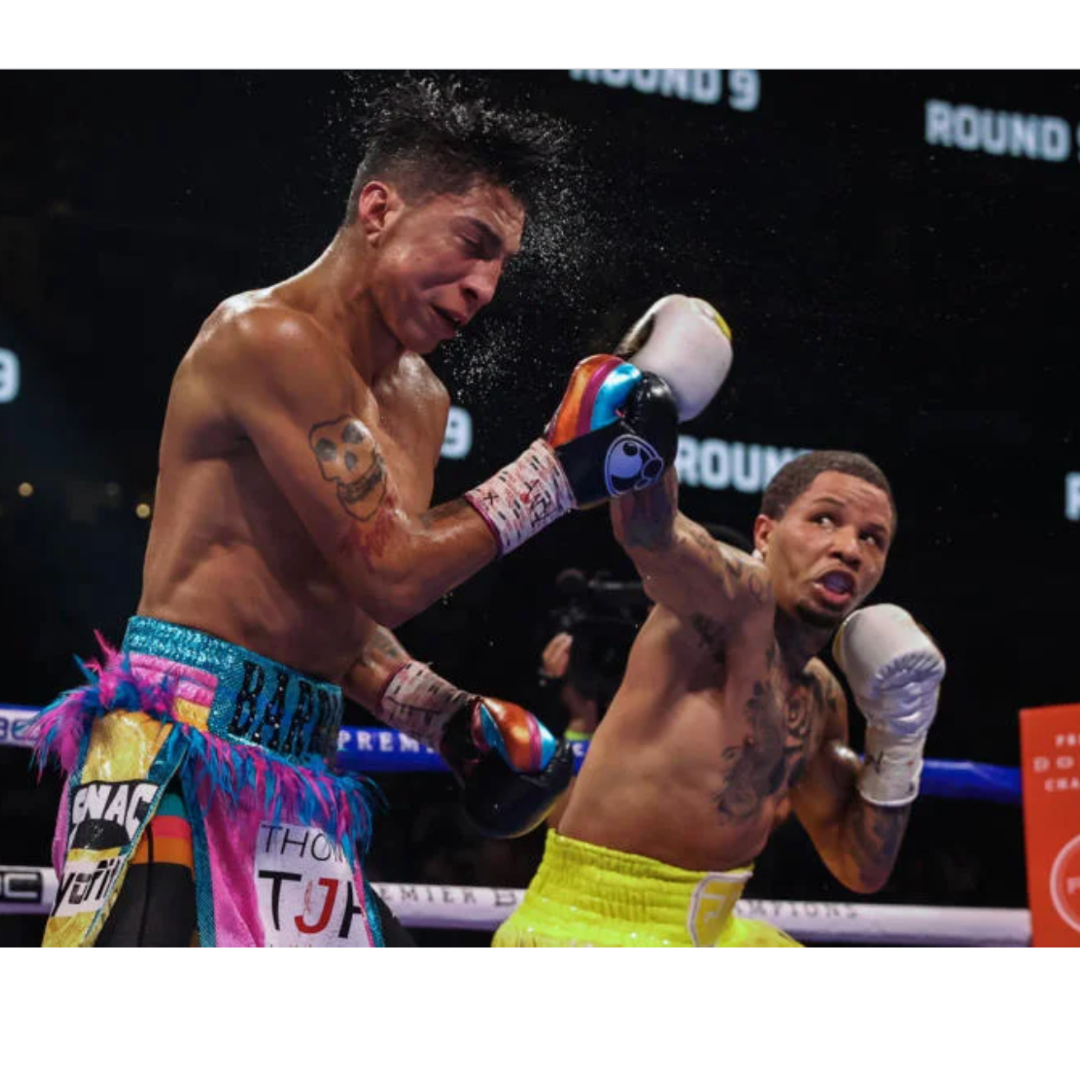 Another example and angle of the reach in boxing. Crazy power in Tank's punches.

His shoulder is in FRONT of his face as he’s throwing that punch which means his scapula is in a TON of protraction as he’s trying to “reach” his opponent (and you can see he does). 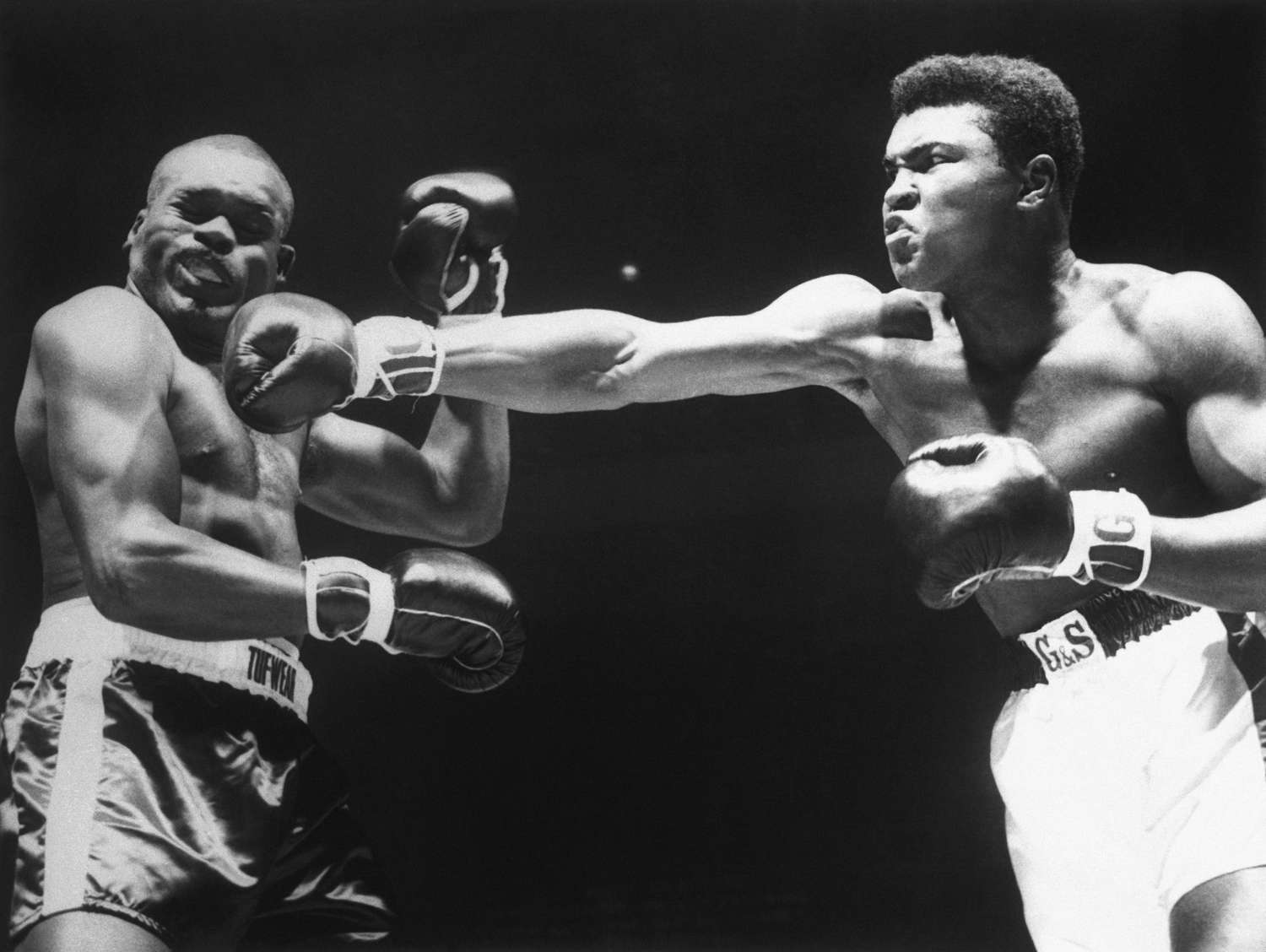 The best to ever do it. Muhammad Ali was so strong. Effortless reach and power through his hips and ribs. 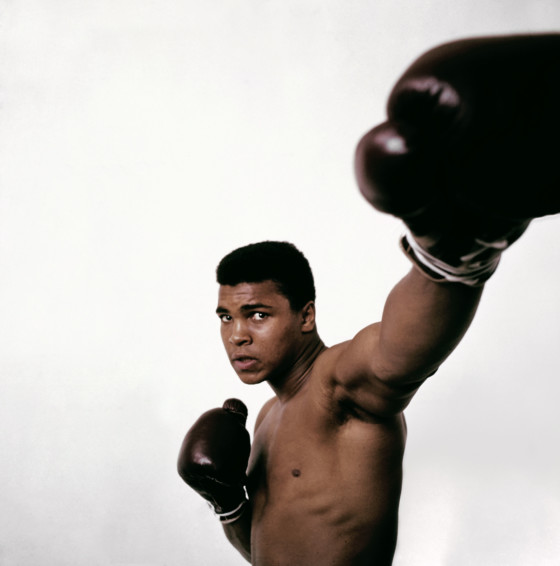 He was really strong. And you can see his serratus anterior in the front under his chest there. That muscle is so important and incredibly neglected. I never trained the serratus before I found Flobility. It's a huge component to opening the rib cage and revitalizing the tissues of the upper back for breath and mobility. 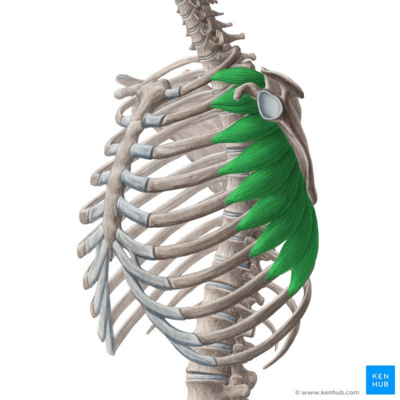 Learning how to “reach” which again is just scapular protraction was the catalyst for so many things for me. I naturally started to learn how to box too as it felt so good after a good Flo session. I’m not good at boxing by any means, it’s just supplementing what I’m doing in my practice with the idea of reaching fully with my punches and rotating from my hips to generate force. It’s also incredible cardio!

It freed my glenohumeral joint (shoulder joint) simply because it wasn’t being smashed backwards with the back and down cue. And I didn’t work on any rotation either. I actually stopped working on rotation for a bit and like magic it improved significantly.

It allowed me to experiment with my body and “play” in ways I never thought I could: 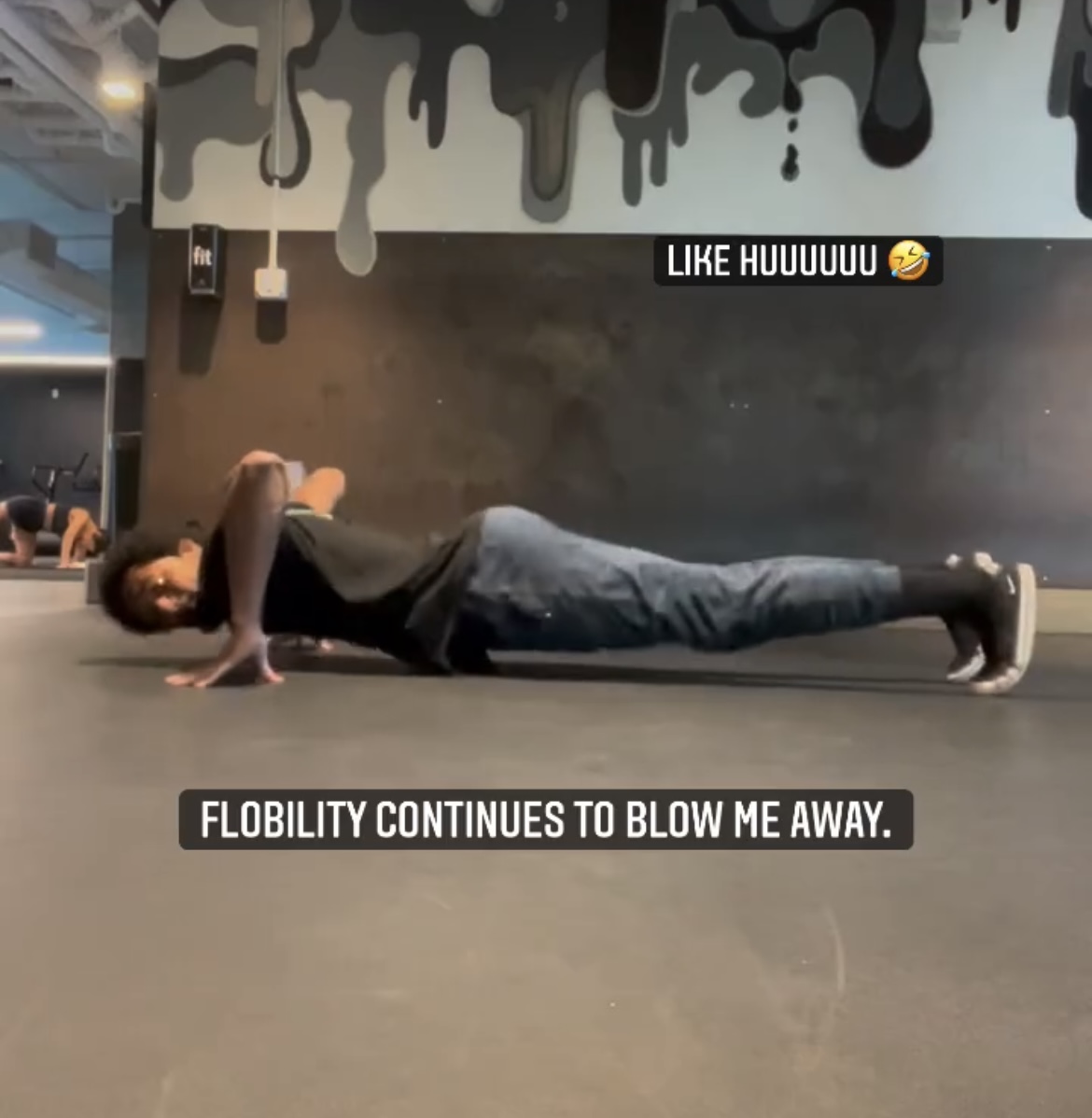 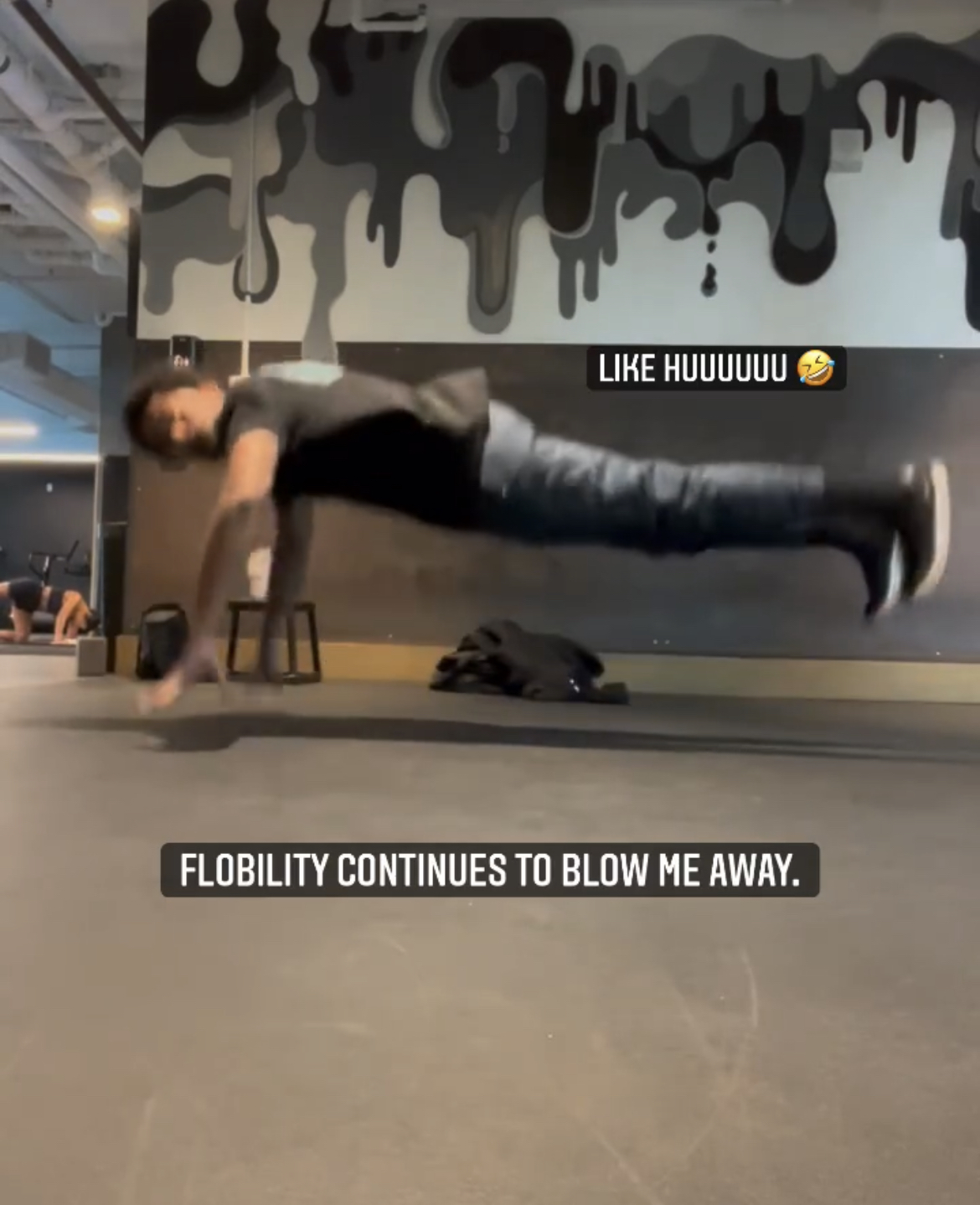 It’s changed how I lift weights: 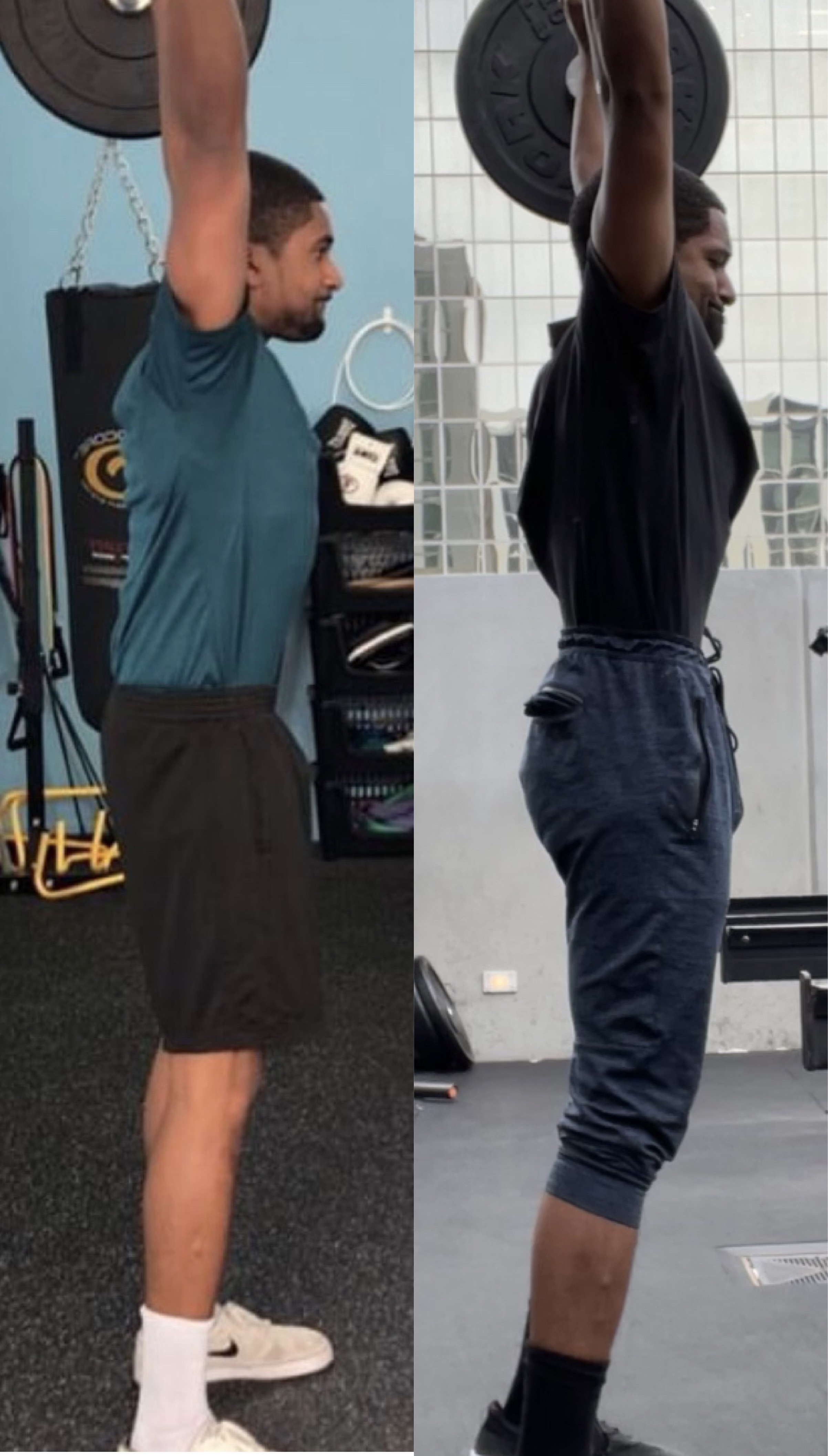 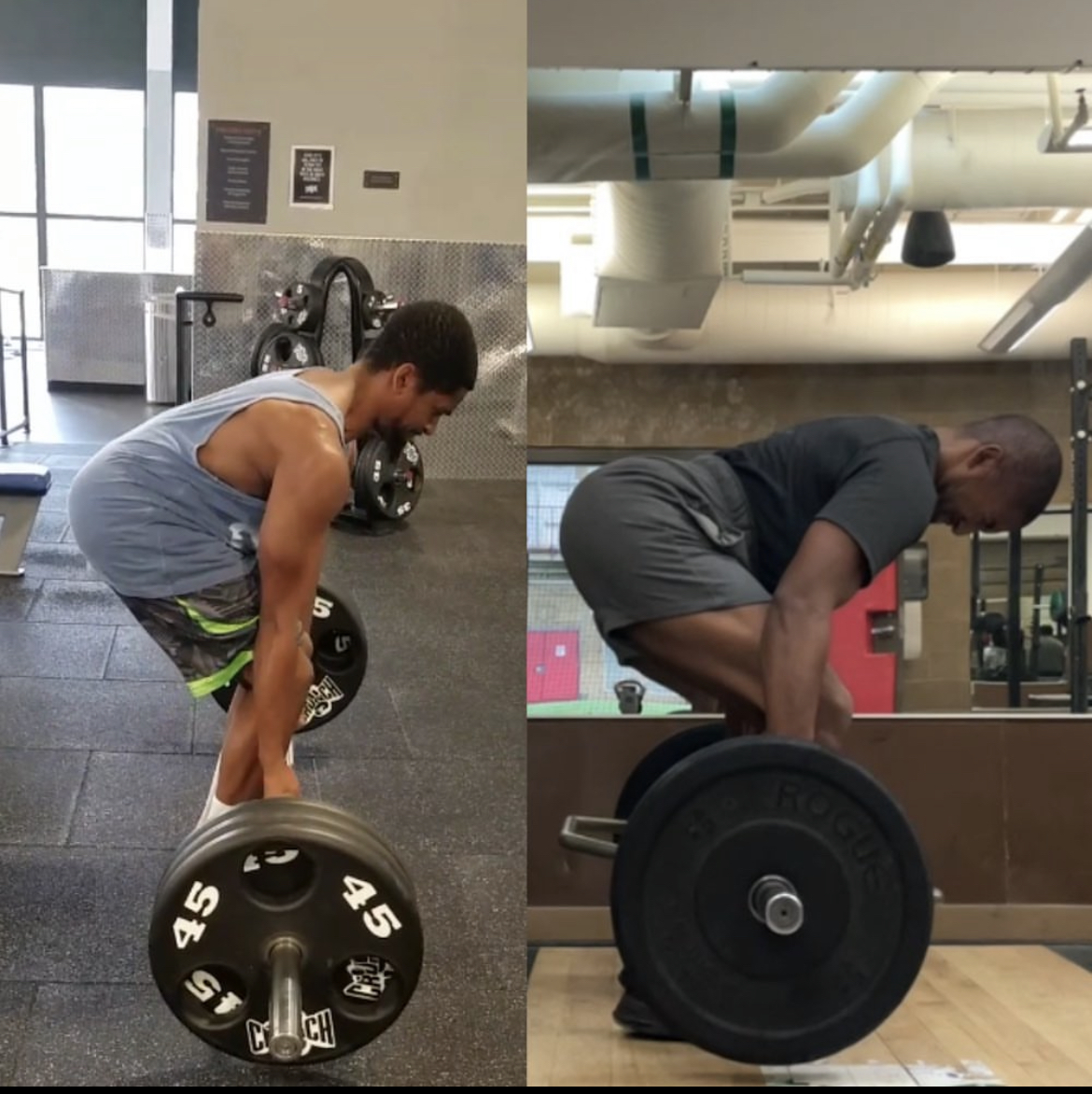 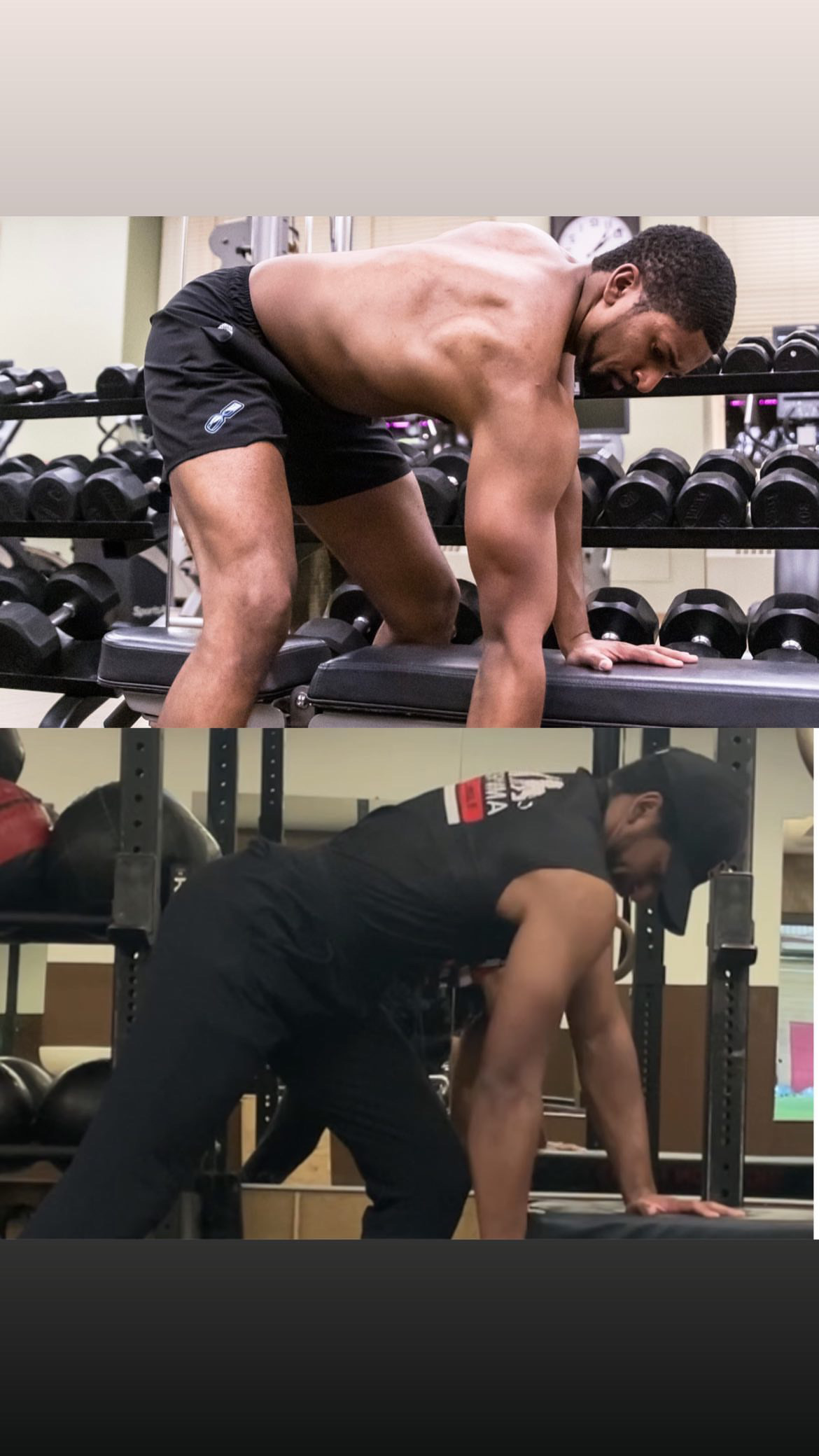 It unlocked a new strength inside of my body and made me feel safe. I can feel so many new things from Flobility and utilizing protraction in my weight training.

Flobility has completely changed my perception of “posture” and what it actually means. I know I have work to do but golly what I’ve be doing certainly don’t look like this: 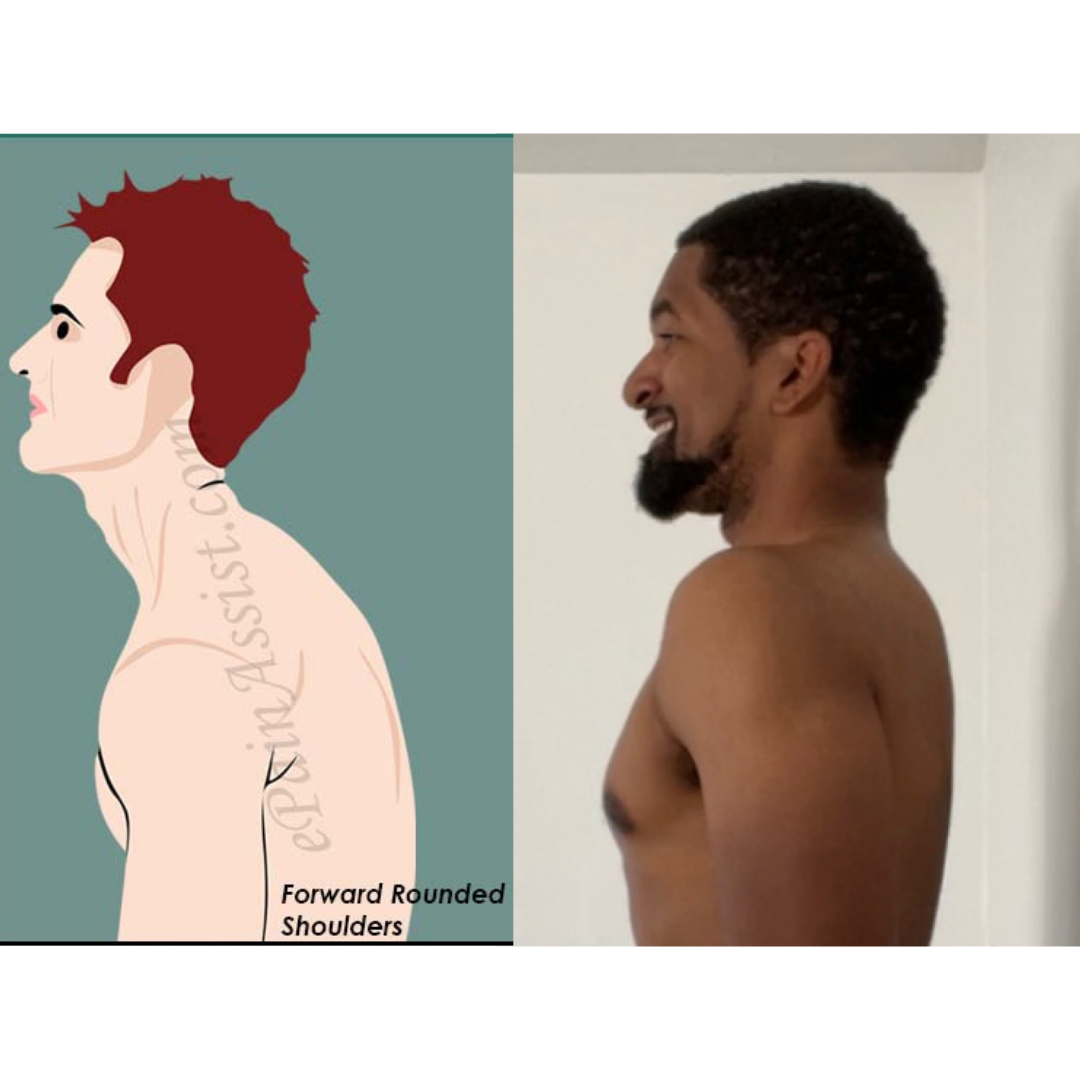 If anything my older pics did: 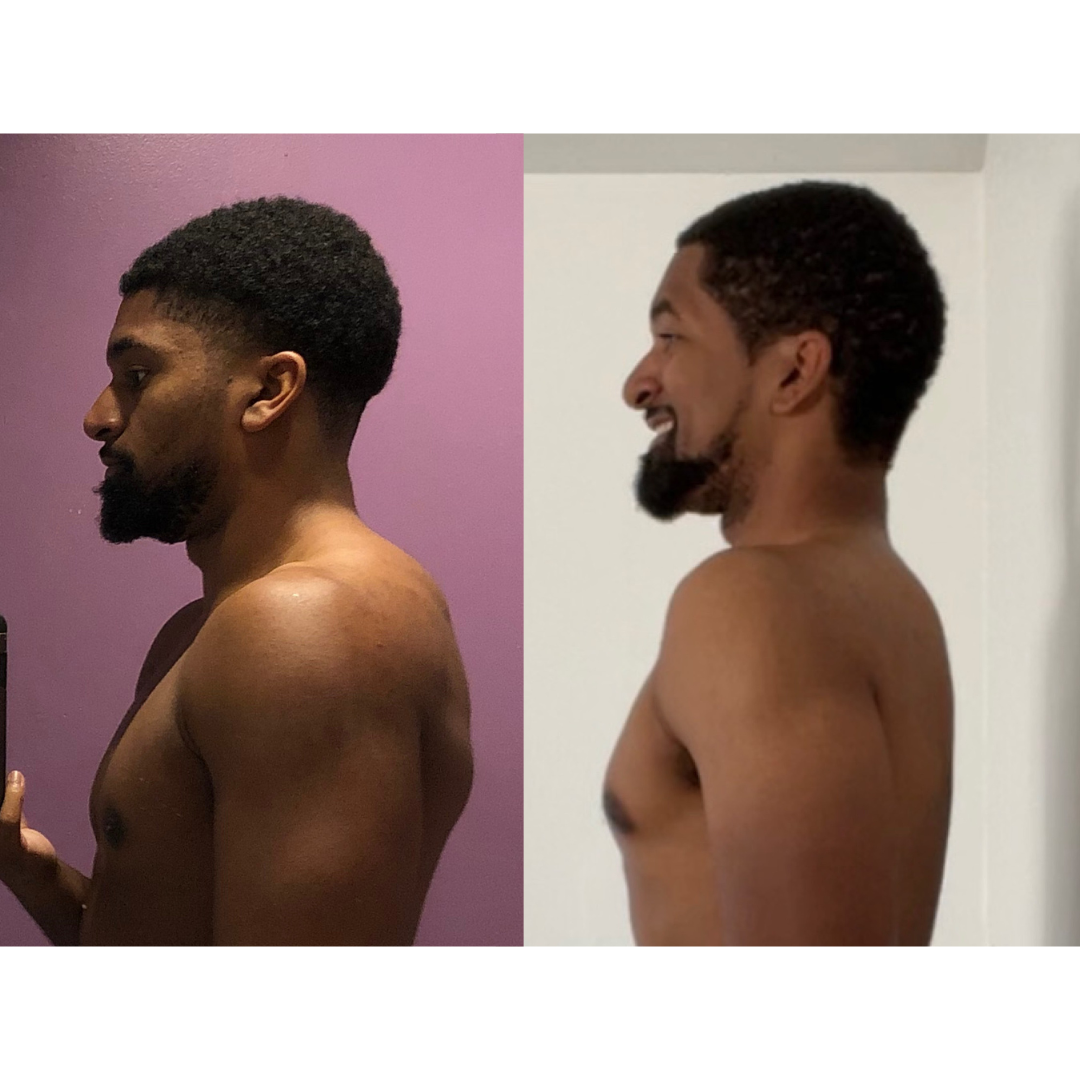 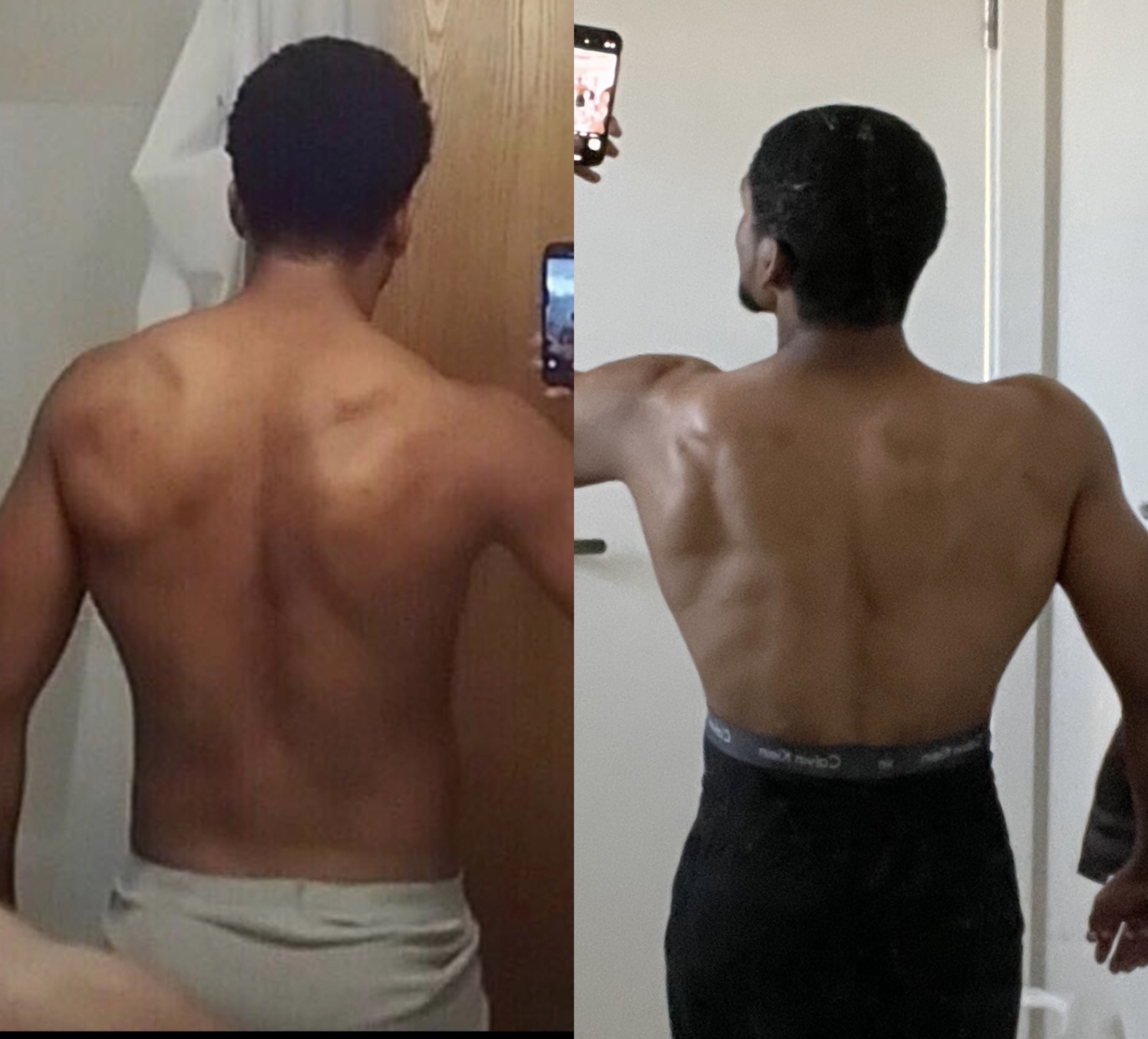 But I didn’t wanna just show you “posture” as before and afters can be very misleading on the internet. I’d rather show you how it’s changed my dynamic movement and weight lifting instead as that’s something you can’t “cap” on, if you will. You can’t “posture” during a sprint… What ya got is what ya got. You can’t posture during any dynamic movement. It doesn’t work like that. If you’re truly running as fast as you can, it is impossible to “posture” yourself or consider your mechanics. All you can do is run as fast as you freaking can.

Butttt it’s worth at least showing you a bit of the “posture” stuff for some contrast.

All of this is a work in progress and will look different the next time I show you. Hold me to that. I will continue to test my practice against my dynamic movement and not just simply on some before and after. I just know the before and after helps you see these things a bit more clearly as studying dynamic movement is very difficult. My entire occupation surrounds it. I stare at movement all day everyday and I STILL get tripped up all the time around what I’m observing. It’s tough. But overtime that will also improve.

I haven't even talked about who I'm learning from...

You've seen how he moves.

You've seen his before and after.

So you can take from this what you will, that’s up to you.

But uhhh, I’m gonna keep working on my protraction #followdirections

If you wanna join me (and receive help along the way) sign up for the Flobility program here:

When you sign up you get a free consultation session with me with options to customize your program based on your specific needs. Hope to see you soon.